Hockey captains come in all shapes and personality profiles, and there’s no handbook on the subject. In their 15 seasons in North Texas, the Dallas Stars have tapped five men to wear the “C’’ on a permanent basis. Brenden Morrow is the fifth, having been awarded the Stars’ captaincy at the start of last season, and he takes a lead-by-example approach to the role.

On the ice, the feisty left wing wears his heart on his sleeve. He’s a passionate player who’s willing to place himself in harm’s way, making his living battling in the corners, setting up in the high-traffic slot area in front of the opponent’s net and going in hard on the forecheck. In the dressing room, he seldom raises his voice, saving the fiery rhetoric for the proper setting.

“I’ve been fortunate to learn from lots of captains and ex-captains, like Derian Hatcher, Guy Carbonneau and Mike Modano,” said Morrow, “and I still have the luxury of leaning on Mike whenever I need to. Each of those guys led in his own way and I did my best to gain insight from each of them. Now it’s up to me to find the leadership style I’m most comfortable with.”

Morrow bears that heavy letter on his jersey very seriously. During the off-season, he addressed the Stars prospects during a developmental camp, and his message was to take pride in the organization, commit the effort it takes to reach the pinnacle of the sport and show your teammates how dependable you are.

Last spring, his leadership was on display when the Stars faced a three-games-to-one deficit in their first-round playoff series against Vancouver. A frustrated Morrow called out his teammates and his contention was that the team was too willing to let goaltender Marty Turco carry the load. He stated that others needed to step up, using words like “scared” and “nervous” to describe the Stars’ performance.

The following night, Morrow put his words into action, notching a power-play goal in overtime on a deflection for a 1-0 victory that extended the series. Dallas went on to fall in a tense Game 7, but Morrow had placed his imprint on the team.

“It got to a point where my emotions took over and the words just came out,’’ Morrow said. “Nobody told me to speak up. It was just pure emotion. The goal was more timely than pretty, but the bottom line was we didn’t win the series. What we learned is that we each have to play our role and do our part in pushing this team to the top.”

Nobody told Morrow to speak out, Morrow saw it a captain’s responsibility.

“He forms his own ideas, which is part of the process he’s gone through,” said Stars Head Coach Dave Tippett. “You get a feel for when the timing is right to do things, and sometimes, the need to say something comes out of frustration and a pure will to win. He did that, and nobody had to tell him. That’s just part of being a leader, taking occasions when saying something can have a huge bearing on your team.

“He’s still in this learning process, but when you stick your neck out and have some success, that fast-tracks the learning. You get a little success and you get more confidence. Those were strong steps he made.”

Teammates know that Morrow doesn’t talk just to hear the sound of his voice, that there is always a purpose.

“It lit a fire under us,” Turco said. “You could see by the way he played.”

“It may not be a comfortable thing for the captain to do or the players to hear,” said teammate Stu Barnes, himself a former captain. “But they need to be done sometimes. Watch him play and practice. Watch his actions off the ice. You see his leadership. You don’t flip a switch and turn it on, but it’s something you continue to learn.”

At 5-11 and 205 pounds, Morrow doesn’t cast an imposing figure, especially next to the towering defensemen who seem to lurk on every opponent’s blueline. Don’t expect him to take the puck in his own zone and start an end-to-end rush either, because he isn’t terribly fast. But he compensates by being hard to play against.

Dallas defenseman Mattias Norstrom knows the challenge of wearing the “C’’ on his chest, having served that role for the Los Angeles Kings for nearly six years. Norstrom observed Morrow’s maturity as a leader after the Stars acquired him in a trade from the Kings last season.

“I saw a lot of good things out of him after I got here,” Norstrom said. “Every night he steps on the ice, he leads by example. That’s the kind of player he is. Hockey comes down to who wants it more, who will dig down deep and battle and fight, and that’s the kind of player he was even before he wore the ‘C.’ Another thing that’s important for a captain is that you have to lead your own way for it to come across to your teammates the right way. Just because you’re a captain doesn’t mean you have to be the most vocal guy in the room, calling guys out and being in their face if that’s not who you are. He does a great job of being who he is.

“The big challenge for a captain is that usually the best time to speak up is after a frustrating game. He has the pulse of the team and the team responds well to him.”

Morrow was the Stars’ first round pick in the 1997 entry draft (No. 25 overall) and he’s developed into one of the club’s draft-day success stories. The 28-year-old enters his eighth NHL season with high hopes that he can bounce back from an injury-plagued 2006-07. He’s the present and future of the franchise with a contract that extends through 2012-2013.

His offensive numbers last season (16 goals, 15 assists) would have been far better, but he missed 33 games after surgery to repair severed tendons in his right wrist. He was out from mid-December through mid-March after a frightening mishap that saw his wrist run over by an opponent’s skate blade on Dec. 26 at Chicago.

“I don’t think people realized how tough it was on him, as long as it was and as much as he cares,” Turco said. “Nobody doubts his passion and his belief in the team. People see how he plays on the ice. He’s an ultra-competitor, and he cares about how guys play and how he plays. It’s not easy for anybody to be out that long, but it was especially difficult for him.

“But it gave him a chance to step back and look at how guys intermingle within the team, the dynamic of how relationships work, talking to the coaching staff more than he normally would. And it took a lot of hard work to get back. He’s always had a leadership role for us and has matured and grown in that role. Without a doubt, it’s his team.”

Said Tippett: “That was certainly something that caused a lot of anguish for him and for us. It was a freak injury, but even when he was away, he did his best to stay close to his teammates and monitor what was going on. He’s a guy that leads by example in a lot of different things. When you’re cleared to play from an injury like that, is your fitness level right? His fitness was phenomenal coming out of a long-term injury like that. Other players look at that and see that’s what they need from the guy who’s leading the ship.”

Morrow dove into his rehab with the same zeal he takes onto the ice, and the mobility in the wrist is virtually the same as it was prior to the injury.

“It was tough not to see the guys day-to-day,” Morrow said. “They had their schedule and I was in the hospital doing physical therapy, then I wasn’t on the road with them. It’s tough to sit around and watch. You want to show you’re ready to handle the role. Things were going well, then to have a serious injury like that was really bad timing.”

When Morrow was healthy, he and center Mike Ribeiro formed an effective combination, as Ribeiro is a terrific setup man and Morrow can finish.

“He’s a little guy, but I don’t think people realize how hard he plays and fights,” Morrow said of Ribeiro. “People don’t appreciate how he works in the corners, how he waits and draws people. He’s a key guy for us this season. I thought I had real good chemistry with Ribeiro.”

Ribeiro is equally impressed with Morrow on several levels.

“He was out of the lineup for months, but what I saw in the playoffs, he showed us how to do it,” Ribeiro said. “He doesn’t like to lose. Winning is at the front of his mind and that’s important for a captain.”

Morrow grew up in Carlyle, Saskatchewan, a farm town with a population of about 1,000. His dad worked for the city and his mother ran the local sporting goods store. They’re now retired and living in Medicine Hat, Alberta.

As a kid, Morrow was a goal-scorer and team leader who was often the alternate captain. But he never was named captain until his final season of juniors in 1998-99 with Portland of the Western Hockey League. 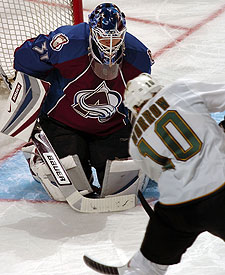 “When I was younger and then in juniors, I just played with an edge and hated to lose,” said Morrow, “and I would try to have that rub off on my teammates.”

Among the players he grew up admiring on Hockey Night in Canada was his future teammate, Brett Hull.

“I didn’t take after his game - my hands are nowhere near as good as his - but Brett Hull was a guy I liked to watch,” Morrow said. “I watched Cam Neely, Adam Deadmarsh, Brendan Shanahan, guys who were the full package, who were tough and also could score.”

Morrow is a hockey lifer. That’s how he met his wife, Anne-Marie, the daughter of former Star and current Montreal Canadiens coach Guy Carbonneau. Brenden, Anne-Marie and their daughter, Bryella, live in Highland Park, and count Mike Modano, Hull, Turco, Zubov and Norstrom as neighbors.

Over the summer, Morrow went on some golf trips with Turco and Modano, working to lower his six-handicap. He also played in Carbonneau’s charity golf tournament in Montreal and spent time with his family in western Canada. But there wasn’t a day that hockey wasn’t foremost in his mind, and his coach looks for Morrow to take even more strides as a leader this season.

“There comes a point where you have to take control and that’s the stage he’s in,” Tippett said. “When he was the alternate captain, he was always respectful of Mike (Modano) and (Sergei) Zubov, and he continued to grow. Now you have to step out of that. Somebody’s got to have the say and he’s got it. Every captain does it and now it’s his turn. He’s gone through the steps and evolution has pushed him here.”

Morrow Takes to the C

Read Morrow Takes to the C by National Hockey League

Georgia Dems wait with fear and angst for help from D.C.

Read Georgia Dems wait with fear and angst for help from D.C. by Politico

On with the show: After 20 months, Broadway in Boston returns with Hadestown

Read On with the show: After 20 months, Broadway in Boston returns with Hadestown by Patriot Ledger on MSN.com

James Morrow: Sydneysiders are still coming to grips with what the future holds

Read James Morrow: Sydneysiders are still coming to grips with what the future holds by The Daily Telegraph